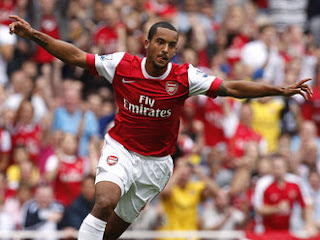 It was joyous occasion for many Arsenal fans, including me, to see youngsters like Walcott, Chamakh, Diaby, Wilshere play well. But it wasn't just youngsters, but also players yet to show true potential like Rosicky, who has been out due to injuries, who showed why he is called good.

And also Arshavin, whose performance in 1-1 draw with Liverpool was called uninspiring.  Other team regulars like Sagna, Clichy, Vermaelen were solid as usual.

Song did well as center back. Well I could just say whole team played really well.  Now we just need to play with same consistency against other teams, who may not be this weak to allow 6 goals (except Wigan I guess who have conceded 10 goals in 2 games).

And finally score more goals than we conceded, its that simple, but not as simple as it looks.

Why is is that, after sporting a french beard (the kind Hans sported in Die Hard movie), you shave it off and my face seems empty.
It seems as if there was a painting and someone just removed it and now there is just a empty frame.
So to avoid emptiness I decided to leave a bit of facial hair in the form of goatee. I like to experiment with my look. It is interesting to note how perception of people towards you changes by addition/subtraction of beard or mustache.
So if I clear the mustache and keep a beard, mom says thats a muslim style. I furthur found out Amish people and some muslims actually do that.
Sometimes due to my french beard some people ask me if I am christian.
So its really funny how people are over enthusiastic to stereotype others.
Like if I say I listen to dido/nelly furtado, I am quickly stereotyped as a pop fan, and I am asked if I like Britney Spears. And this comes without realizing that I am not your typical music listener who listens to one genre of music. And my playlist has not only dido, but also BIG, Dre, Korn, Scorpions, Joe Satriani, Green Day, Indus Creed, Johnny Cash, Mohd. Rafi and many more music acts cutting across genres. My motivation to listen to different kinds of music is not only to appreciate and understand all music forms but also because I listen to different kinds of music according to my mood.
So if I am riding bike, I don't listen to heavy metal, as it makes me ride in rash manner, so its usually punk rock, as it is simple and doesnt take up too much concentration while riding.
If I need to lose some pent up energy then what is better than some air guitaring while listening to iron maiden or for that matter KISS.
When I need to listen to soothing voices its usually dido/nelly furtado/KT tunstall. And if I am really down then Mark Knoffler, Johnny Cash.
Then when I am walking through my childhood neighborhood, I listen to retro classics like Scorpions, Deep Purple, Doors.
When its time to move to a beat its usually some copied bollywood dance number or some crazy hip hop beat like JayZ.
When my mind is over run by english songs I playback some hindi songs that I like both old and new, from Mohd Rafi to Adnan Sami.
Now that doesn't make me a loyal fan of anything, and this doesn't even cover all the music acts that I love. Still I have just begun and there is a list of movies I love yet to come.
But I will stop and hope that people don't stop.
I hope people keep stereotyping me, there is more fun in making people think something you aren't. And then shocking them by doing something they didn't expect "my kind" to do.
Adios ! Amigo! gotta go to work!