I have lost it. No, I am not talking about my virginity. I have lost my stamina for gluttony. I am aware of the fact that it is one of the so-called 7 deadly sins (Morgan Freeman,Brad Pitt movie). And reality is that I can't anymore eat plateloads of food without breaking a sweat (if it is a A/C room). 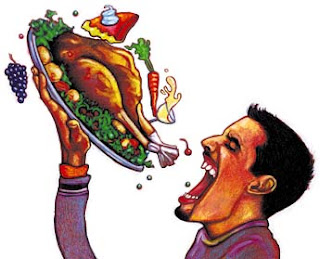 I am not sure I know the reason behind this loss of appetite. Earlier eating out with friends/family never saw food wasted due to over-ordering, as I was able to finish off everything, with my friends comparing my eating capacity to that of bike's fuel tank.
Maybe it is because I have become flab conscious. Because even though I never became obese, I did gain weight, as compared to my skinny-look of college days. And now the target is always to eat less calories than what I consume. Neither do I work-out everyday nor I am a couch-potato. But of course, I have found that, eating less takes less effort than doing a rigorous physical work out.
So maybe I do know why eat less, especially during late dinners with friends/families. Food intake is so less during these late hours, that sometimes a bowl of soup is enough for me. In spite of that I don't mess around with my breakfast and it is as filling as it is was.
I guess eating less at the end of the day, isn't such a bad thing.
Posted by sanket kambli at 7:56 PM 3 comments: