I have had enough of this. I am going to get my cup of tea. With these words I entered the pantry of my office. I was reluctant to prepare tea for myself, as I had been used to getting tea served at my desk at my last workplace. But the temptation to have tea overpowered my laziness. I had already observed others, as to how they operate the "hot pot" to pour tea/water. And so I tried to follow the same process; pour some hot water, then some milk and put the tea bag, then add sugar, and mix it all up. Not only was the milk lukewarm. The tea bags were not dripping the flavor quickly. The end result tasted less like tea and more like flavored milk. Well, one more reason for not making tea. But then what should I do when I am tempted to have tea? Maybe I should carry a thermos filled with hot home-made tea. Maybe! Or practice to make better tea with those stupid Tetley tea bags.
Posted by sanket kambli at 11:07 PM 1 comment:

Spain win the World Cup for the first time. 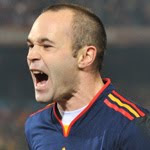 So Spain are world champions.

After being crowned European champions, they held their nerve against Holland, to become World Champions for the first time in their history.

Hyped and expectant teams went out of the world cup, as two unlikely teams (even though they were my fave) battled out in the 2010 World Cup Final. Andres Iniesta scored a late goal in extra time to save Spain from Penalty Shootout trouble.

Holland played well, but lost their nerve, while Spain were more patient in a way. Maybe it was confidence that they could win it in spite of taking off David Villa. Whatever be the reason, they have won it. And this golden generation of Spanish players will be applauded by many.

From Arsenal perspective, its good that one of the Gunners, Fabregas will be able to lift the World Cup. Still, it does bring forth the question of his move to Barcelona. Anyway we will know it sooner than later, whether Fabregas will be Gunner for another year or not.

Robin Van Persie was dejected as was any Holland player, I hope it fires him up to do well for Arsenal, and I hope he stays injury free from now on.

So now that World Cup has ended, its time to move on to Premier League. As new season begins, lets dream that Arsenal are crowned champs, and realistically hope that Arsenal finish at least second or win European Cup, now thats wishful thinking. More on that later.

Posted by sanket kambli at 2:16 PM No comments: