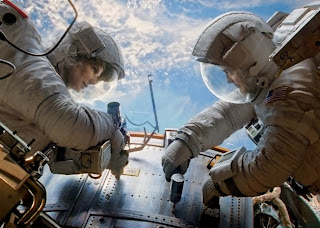 I watched this movie really late, and I mean late in the sense that it may be the last show of Gravity 3-D in Mumbai.
Thankfully I watched it and came out more than impressed. It deserves the tag of "Best movie of 2013".
It is surely one of the best movies ever, and deserves at least a couple of Oscar nominations.
Its really a special movie, as it has only 4 characters. Oh yes, two human characters and two non-human characters. I will leave you to come to conclusion as to which are the other two.
Both human characters have been played by experienced actors, so there isn't any fault in their performances. Of course, Sandra Bullock shines through and reminds me of character "Ripley" played by Sigourney Weaver in sci-fi horror flick "Alien".
And what can be set about the "space" where this movie is set in. You feel it around you. You feel its not Sandra who is up there, but you. You feel the mixed emotions that any space walker feels, the silence, the solitude, the amazement of looking at our blue planet and maybe the aching of going back home.
There are so many themes in this movie, maybe as homage, I am not sure, ranging from "Alien" to "Wall-E". Giving out more details will spoil the experience. But do look out for "baby in womb" thematic.
Anyway, the beauty of this movie is very well enhanced by the use of 3D at the right time, giving you the thrill of a space misadventure. There will be lots of "oh shit! No!" "damn! thats beautiful" "come on you can do it"
moments, you know them, sometimes referred to as "the edge of seat".
I don't know how many of you have seen it. But those who have missed it, have really missed a gem of a movie in which there is nothing wrong. All the technical aspects of this movie, be it sound, direction, narration, plot, dialogues, acting are just perfect. But put it all aside, its what makes you feel is what is more important. And Gravity makes you feel the pull, the pull of a magnificent space action drama, that should not be tied down to one specific schematic genre. "You need to learn to let go" ......

I have watched a lot of movies, and missed out on sharing what I felt about them, of course why you should watch them. So I will try to flashback into my cine-memories.

1) The Hobbit: The Desolation of Smaug
Its a story that links Hobbit 1 to the yet unreleased Hobbit 3, so clearly you need to have watched the first iteration, to make head or tails for this part. I am not saying the experience will be boring if you don't, but it sure will confuse you. Of course being familiar with Middle earth mythology also helps. So even if you don't but want to watch this one, then you may have mixed reactions to this 48 fps dazzler. Some find it too realistic making it look like low budget tv serial kind, but there are some who may be dazzled by the over realism, wishing to be part of that magical world. A world which seems perfect in terms of grandeur and history. You will love the characters and their quirks. And you may even wait for the next part to release.
I just love the name "Thorin Oakenshield".

2) The usual suspects
Watched this movies after so many years. And I still love it, especially for Kevin spacey,Chazz Palminteri and Gabriel Byrne. The convoluted yet simplistic plot, profanity laced dialogues, yet at times mystical in a weird way. Thrill seekers will love it, and those who like action won't regret watching it. Go watch it, it has already inspired Bollywood to produce "Chocolate".

3) Insomina
A simple thriller, that is in a way a bit predictable if you put your mind to it. Still it works solely based on performances of Al Pacino and surprise package Robin Williams. If by telling you that its director is one Mr. Nolan it raises your expectation, do keep them intact and go for it. Oh yes, the location where this movie is shot is creepy and beautiful at the same time.

4) Harsh Times
Sir Chrisitan Bale to me ranks higher than most actors solely on the basis of one power packed performance after another. For me he never hits any low, even if the movie he acts in is not exactly stellar or legendary. So if you are a fan of Sir Bale, check it out, otherwise you aren't missing out much. As even though it has Eva Longoria as a bit of latino eye candy, this movie directed by director of "Training day" could have been better if its plot had much more depth.

5) Now you see me
Watched it as I heard a rumour that Dhoom 3 is based on it. Its a decent movie, just a one time watch thanks to Mark Ruffalo, Morgan Freeman/Michael Caine, without whom this movie would have nothing. As characters played by Woody Harrelson are Jesse Eisenberg  wafer thin in terms of role. They just come into scenes and then leave the scene without leaving any impact. Its just like the name of the movie.

6) The Bank Job
Its an action flick that stars Jason Statham, so I pegged my expectations accordingly. And at the end of it, liked it quite a bit. Its a brit robbery thirller, with a parts of movie that may seem rather unbelievable still some parts of it are said to be based on real life events, so there you go.

7) The Haunting
Its a black and white horror movie, a combination not many are used to. And this movie doesn't follow our current generation of horror movie templates. Still you should watch it with open mind, and let me know if you don't feel scared. I just don't feel like unraveling any more, but be assured there is no fault in performances of the cast and capability of the story.

8) Trainspotting
what to say, its hard hitting, its shocking, its lyrical, its hypnotic, its crazy, its twisted. Danny Boyle at his best, Evan Mcgregor is so underrated. It rocks not only in terms of narration, plot, but also music, dialogues.

9) Clerks
Funny shit, watch it and watch it again. yes its a bit overrated, but still funny.

10) TV series - Sherlock
I am sure I will run out of superlatives, its really good. Everything is perfect, especially the lead actors. Everything about them is just awesome. Great stories, good pacing and plot. And not to mention exquisite acting signed off with superb dialogues. And  Benedict Cumberbatch makes Robert Downey Jr look one dimensional. and before I forget a brilliant bastard for a villain in the form of  Andrew Scott as Moriarty.

Hopefully this post will egg me on to write more regularly. Fingers crossed.

Posted by sanket kambli at 10:07 AM No comments: